So, it is once again the end of the year. No Christmas post, I am afraid, but in short; I got the Queen News of the World 40th Anniversary Boxset, I got Attack on Titan Volume 23, and most importantly, a Penny Whistle. The picture below shows some stuff. 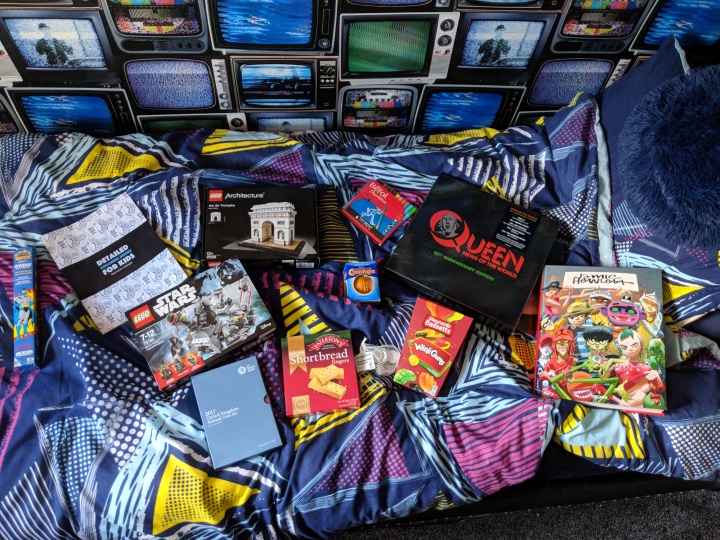 Firstly, when discussing the year, I have to do a current state of the blog post. This year has seen a decrease in people reading If you ask me, and the first decrease I’ve had since 2013 when the blog began to change. I think a lot of it has to do with the lack of posts during the spring period, and maybe a touch of stagnation in my posts. That doesn’t mean the year has been bad, mind. This year was the third best year in terms of visitors, and fourth best in terms of views.

The most popular post I made was the reaction I made to the announcement of a Female Doctor Who, and it was not a very positive reaction. Mind you, my views have changed since then on the prospect. I still think Whittaker and the show’s current change of direction will not be good, but I will watch it. Still, a female Doctor is gimmicky. I ended up with 91 followers this year, with more American readers on the blog now. And to the single Kazakhstani person who was on here, hi.

We must also look at this year in regards to current affairs. Theresa May called a snap election, and lost her majority, and is governing our country in a time where we need strong and stable leadership. Something that we were promised and we don’t have. Jeremy Corbyn headlined Glastonbury, and while he didn’t win the election, he ‘lost’ as one of only 2 parties that made gains; including Tory safe seat Kensington.

Donald Trump hasn’t killed us all yet, but we still have 3 years left for him to do so. He has been having a playground fight with Kim Jong Un. Terror attacks hit Manchester and London, where some of my friends were involved. My mate Travis got to meet Prince Charles. Prince Harry broke the hearts of many women by announcing an engagement to Meaghan Markle. Oh, and BBC One changed their idents to a bunch of people standing around and staring into a camera.

As for my year personally, when I do these posts, I usually reflect on the year from a subjective point of view, and this year will likewise be reviewed from a subjective point of view. This year was one with big anniversaries and; especially in the last month, big, sweeping change. The two biggest anniversaries being my 20th birthday, and my parent’s 20th wedding anniversary. They met in 1992, moved into our house in ’95, and married in ’97, after having me. So yes, I am a genuine bastard.

20 years is a fifth of a century, and that is a long time, and while they greatly annoy me, I do love my parents, and I love how they are probably one of the most stable couples I have ever seen in my life. And turning 20 was great, though, with my 21st fast approaching, that will be the more monumental year for me, in all likelihood. And while it is probably more to do with coincidence, I have seen a lot of things from the past 20 years reappear, such as Samurai Jack coming back on TV, and seeing and speaking to people I have not seen or spoken to in years. So that’s been good.

2017 for me has had its good and very bad parts. I went to Carnforth with my family, staying on a farm with the majority of my extended family on my father’s side also with us. My cousin got married, and I didn’t go. But I did get accepted to do a dissertation at university in my third year, ending a rather challenging second year for me. I got to spend some more time with my cousins, and my cousin once removed. Though unfortunately, we lost another member of my family this year, much like we had the year before. My Grandad died at the beginning of the month, after a short illness. This has been a huge blow to me. I lived with my Grandad during my time in University, and while I will still be at his house with my Uncle in January, it will be very different.

Not all the change has been bad. My room was redecorated for the first time in 8 years. While the wall of Ben is gone, the wall of sound; containing some of my vinyl discs, has flourished, and I am very happy with it. My room is much more spacious now and is a lot better for it.

But we won’t look back in sadness or anger. A funny story about my Grandad. I received a mini stress toy during fresher’s fair. Its head came off, as it was only made from a soft, sticky rubber. My Grandad decided that he would fix it. He glued the head back on, seemingly missing the point of the toy being stretched. My Grandad was someone who liked to build or repair things.

What changes will 2018 bring? My cousin is due to have another baby, a little girl, on the 15th of April. That was the day I was due in 1997. While Zack was 2 weeks overdue, I don’t know if this baby will be. If this baby is born on the 8th of April, I will be pissed off. As much as one can be with a baby. We call the baby Owl because that is what Zack calls her. I will be graduating in the summer as well, so that will be fun. I won’t be doing a Master’s. I have been in full-time education for almost 17 years! As for this blog? I want to try different sorts of posts, experiment a bit more, and get more guest writers. At least one every few months. 2018 will be a challenge, a real challenge, but let’s bring it on!

Since 2012, Benjamin Attwood has written for the If you Ask Ben blog.

With the Music industry evolving beyond physical media, how do we sell music to people now? Remixes? Aren't they just 'Remasters'?

Nostalgia is sort of like a drug. It can be addictive. In this post, I consider how nostalgia can hinder people, as well as help them.

Piracy is changing. But how?

Beyond The End of the Rainbow

Holland by The Beach Boys: Track by Track